Grrr.... Dead computers all around me.

So, mother in law's computer died, now my wife's machine has bit the big one.

When she called saying that the computer was dead I was in the middle of the work day and was trying to figure out what was going on, but given that it was showing no signs of life I had to wait until getting home to find out. Sure enough, dead computer, no lights, no sound, just a brick. I pop the cover and get treated to this. 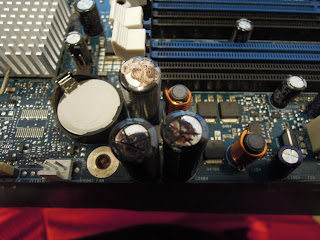 That's a set of blown capacitors - without those the board is basically scrap at this point. And now my test / backup computer gets reformatted and put on the wife's desk while I figure out what needs to be done to fix this.

This highlights one of my big gripes with computers these days - that board is going to be difficult to repair, so it's probably going to wind up in the trash. Don't get me wrong I'll try to give it a shot at replacing the bad caps on the board, but it's not something that I've bothered to do in the past. And while I can get used parts to replace the board those used parts aren't as cheap as I would like - I was getting quoted 50$ or more just for a board - where I can get a replacement computer, with a warranty, for 200$ if I'm not picky on what the computer actually is.

For the 5$ worth of parts I'll be giving the repair a try, if I can get it going again then great, save some cash. If I don't it might make a nice wall hanging or something I guess, other than that it's off to someplace where it will be burnt in a fire by child labor to reclaim the shiny bits from it I guess.
Posted by Adam at 08:00